Horrible Bosses stars Jason Bateman, Jason Sudeikis and Charlie Day have a horrible time on screen in the R-rated comedy. Their bosses (Jennifer Aniston, Colin Farrell and Kevin Spacey) make their lives miserable as the three plot to make their lives better by knocking off those very bosses.

The trio spoke recently at the Waldorf Hotel in New York City about their impeccable comedic chemistry in Horrible Bosses, which of the three — Jason Sudeikis, Jason Bateman or Charlie Day — would be the best boss and whether being sexually harassed by Jennifer Aniston is really that bad. 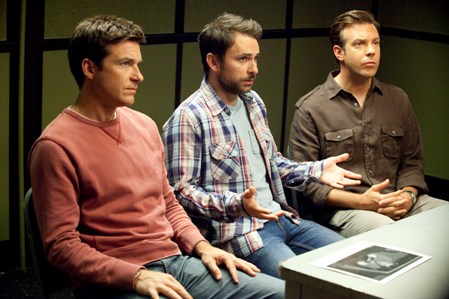 SheKnows: Charlie, in the film and also the sentiment throughout is that it really wasn’t that horrible for your boss, Jennifer Aniston, to be hitting on you. Is it really?

Charlie Day: I didn’t have it so bad. It was just acting and reacting. I’ve gotten that question here and there. I got one earlier from a reporter who said, “I would have slept with her.” I said, “Are you in a relationship?” He says, “Yeah, I’ve been dating a girl for six years.” “Will you write that in the article? [Laughs] I doubt it.”

SheKnows: What were your initial reactions reading the script? Did you think you would get away with being funny about murder?

Jason Bateman: My initial reaction was this is going to be a bunch of silly crap. Because, a movie about killing your boss is, well, it could not be great. I kept laughing at things I didn’t think I was going to… and it just kept going and going and going. The writers did a great job of somehow grounding this absurd concept and hopefully we didn’t screw any of that up.

Jason Sudeikis: It was mostly about the concept — can we do a comedy about murder? — less than it was the content of the lines. That didn’t scare me as much as it did — can we make murder funny? I think all of it came together.

Charlie Day: I like the twists and turns of the plot. There were some actual dramatic surprising things that happen in the script that I did not expect. I cried my…

Charlie Day: I cried my eyes out.

Jason Sudeikis: You said it was allergies! Then he admitted the movie made him cry.

SheKnows: Was it a challenge to act so repulsed by Jennifer’s advances?

Charlie Day: Yes, especially when that person is one of the most famous actresses in Hollywood. It was extremely awkward.

SheKnows: You all had such bad bosses and Jason, you had the boss from Swimming with Sharks. Is Kevin Spacey intimidating in person?

Jason Bateman: He’s not mean on the set, but he is very good at switching that switch when the director says action. When it was talked about that they were looking at Kevin Spacey for that part, I thought, “You’re never going to get him. Come on, this guy’s an Academy Award-winning actor and we’re doing a comedy about killing bosses.” Clearly, there was a mutual attraction to the material. 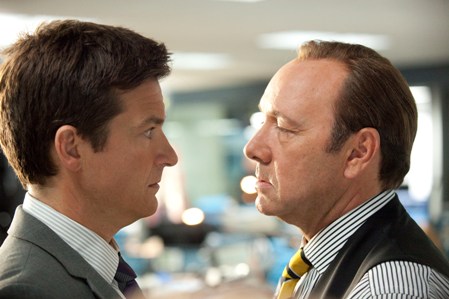 SheKnows: You guys knew you were making an R-rated film with Horrible Bosses. Was that freeing?

Jason Bateman: We probably think we’re a lot funnier than the crew members do.

SheKnows: Did you get to improvise for minutes on end then?

Jason Sudeikis: Less improvisation, honestly. Improvisation, for me, when you say that, I think, “The cameras start rolling and we don’t know where we’re going, and let’s just waste peoples’ time and money.” That’s not what happens. There are a lot of people, a lot of time. All the writers laid out a tremendous framework. And then we just sort of, at the beginning of the day, the four of us — Charlie, Jason, Seth and I — we developed a different rhythm.

SheKnows: The camaraderie between you three is impressive. Was it like that immediately on set?

Jason Sudeikis: It was pretty quick.

Charlie Day: We didn’t waste any time, really, fighting each other. There was a lot of chair throwing on set.

Jason Bateman: You can drink into a good relationship with anybody. 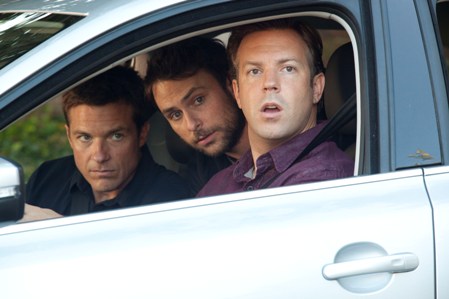 SheKnows: How do you all keep a straight face with each other being so funny?

Jason Bateman: You know, Jamie Foxx is my favorite part of the movie, he’s amazing.

SheKnows: We heard Jamie was the one who cracked up the most…

Charlie Day: I don’t know if Jamie Foxx was laughing with me or at me. He would laugh a lot at us. I find him amusing in a lot of ways too. It was a two-way road.

SheKnows: Out of the three of you, who do you think would be the best boss?

Jason Sudeikis: I think that I would be the best boss for the success of a business. We’d have a real loosey-goosey start time and then once we get bored, we can just play paintball.