Madonna has ditched 23-year-old Brazilian DJ Jesus Luz for another dark-haired hunk — 24-year-old French dancer Brahim Zaibat. If you plan on being Madonna’s boy toy, you better be young and exotic! 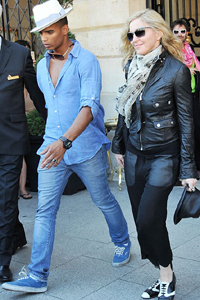 With the exception of blond-haired Guy Ritchie, Madonna’s type trends towards dark and exotic guys in their early 20s — and we can’t say we blame her!

Fifty-two-year-old Madonna has been spotted with French dancer Brahim Zaibat, 24, since September, when they met at her Material Girl clothing line launch party.

He was a backup dancer that performed a solo dance act at her clothing launch when he caught her eye. They were spotted making out at a dance club, and more recently in Paris leaving the Ritz.

“It wasn’t her deliberate decision and it wasn’t mine,” Zaibat told France’s Grazia magazine. “It was because it was Madonna that the affair took on massive proportions. Nothing was calculated by us. We had a nice night together without thinking that there might be paparazzi there.”

He went on to say that things have progressed “very fast” with the couple, however, the devout Muslim said that his parents aren’t thrilled that he is dating Madonna… especially since his mom is 44 years old, which is younger than Madonna!

“I certainly wouldn’t say we’re overjoyed by Brahim’s relationship with a non-Muslim, and the fact that she’s Madonna doesn’t make things any easier,” his mom, Patricia Vidal, told the Daily Mail.

“My mouth fell open. Madonna was already a big star when I was a schoolgirl, let alone when Brahim was growing up. The whole situation is very strange indeed — surreal even,” she goes on to say.

Check out Madonna with her ex-flame below, 23-year-old Brazilian Jesus Luz. Do you think Madonna has a type or what? 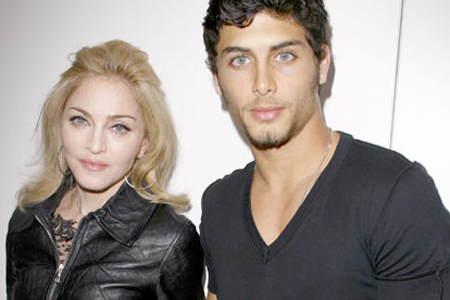