Tim Pawlenty admitted in a recent interview that he goes goo goo for Lady Gaga. 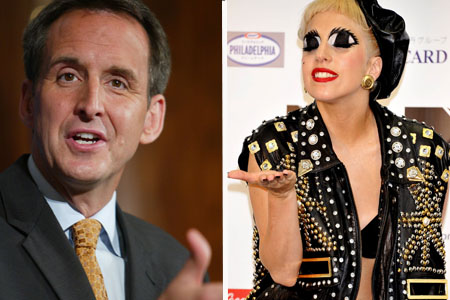 “Well you know, in terms of the beat, I like Bad Romance,” Pawlenty said. “I gotta say, even though she’s a little unusual, Born This Way has some appeal. She’s actually very talented. Now if you go to the end of the HBO special, the Lady Gaga HBO special, and you watch her sing a cappella Born This Way, she can sing. She can definitely sing. She’s talented.”

Okay, we take that back: He’s a huge fan of Mother Monster — he watched the HBO special and everything!

President Obama kind of cornered the market on pop culture knowledge in politics — he’s pretty much loved by everyone in entertainment and once admitted he has Jay-Z on his iPod.

What’s next? Will Michele Bachmann come out and say that she’s a huge fan of Tom Petty and Katrina and the Waves? Oh, wait…

Do politicians’ entertainment preferences carry any weight in your voting decisions?