Megan Fox is posing in a new ad campaign for Armani — and the glamour girl looks gorgeous! 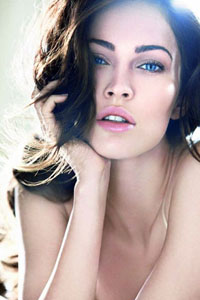 If looking good is the best revenge, then Megan Fox has got this down pat. The former Transformers star appears in a new series of ads for Armani looking fresh and gorgeous.

Unlike her previous Armani campaign, which featured Fox provocatively posing in her underwear, the new ads — for the Armani cosmetic line — feature nothing but Fox’s beautiful, if surgically-enhanced, face.

Looking this good should help Megan get over her current woes — she is said to be devastated by Shia LaBeouf’s revelation that the pair hooked up while filming Transformers.

Fox was fired from the film after calling director Michael Bay a Nazi in the press. Married to Desperate Housewives star Brian Austin Green, she is currently filming The Dictator with Sasha Baron Cohen and a new Judd Apatow flick This Is Forty, both due in 2012.

read on for more megan fox