All My Children and One Life to Live are moving to the worldwide web! The canceled soap operas will get a new life as their rights have been purchased by Prospect Park to continue running online.

Fans of All My Children and One Life to Live can rejoice as it was announced today that the two canceled soap operas will continue airing online, as the rights have been purchased by Prospect Park. The cast will remain the same (and that includes Susan Lucci, reports the New York Post) and the storylines will continue where they left off. 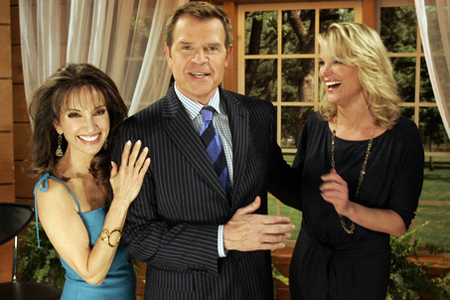 All My Children will air its final episode on TV on September 23 and One Life to Live has its last TV appearance in January of 2012. The shows will then pick up where they left off online, with Prospect saying more details will be coming out in the future.

“We are privileged to continue the legacy of two of the greatest programs to air on daytime television, and are committed to delivering the storylines, characters and quality that audiences have come to love for over 40 years. All My Children and One Life to Live are television icons, and we are looking forward to providing anytime, anywhere viewing to their loyal community of millions,” said Rich Frank and Jeff Kwatinetz of Prospect Park in a statement. “Technology changes the way the public can and will view television shows. Now that there are so many devices available in addition to television sets, viewers are taking advantage of watching shows where ever they are and on any number of devices. The driving force in making the switch and attracting new audiences is to have outstanding programs that people want to watch. We believe that by continuing to produce the shows in their current hour format and with the same quality, viewers will follow the show to our new, online network.”

Agnes Nixon, creator of both soap operas, gives her seal of approval. “I’m just so happy that ABC found a home where the legacies of All My Children and One Life To Live can continue. I’m excited for their future with Prospect Park,” said Nixon. “I also am so happy for our loyal fans, whom we love so much, and who have been so supportive over the last 40 plus years.”

Tell us: Will you watch All My Children and One Life to Live online?