We might as well begin the Oscar campaign now. We just got our first look at Meryl Streep as Prime Minister Margaret Thatcher in the international teaser trailer for The Iron Lady. 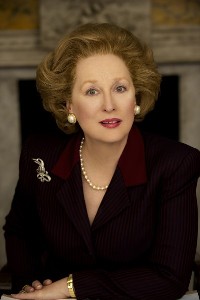 Though it’s short and we don’t see Meryl Streep until halfway in… well, let’s just say it makes an impact. We see two advisors lecturing Thatcher about how her image is all wrong.

She needs to lose the hat and the pearls, they say. And her voice is apparently too high and without authority. (That made me giggle.)

Then we hear that voice saying that she’ll lose the hat, but the pearls are non-negotiable.

This has to be one of the better teaser trailers for a non-sci-fi film out there. You get in one minute everything you need to not only appreciate anew the acting powerhouse that is Meryl Streep, but you really get a sense of the force of the first female prime minister in British history.

The Iron Lady will be released in the U.S. on December 16.