Lady Gaga has an unhealthy obsession with her body, according to investigative journalist Ian Halperin.

Lady Gaga might preach about self-confidence and being Born This Way — yadda, yadda, yadda — but Star magazine reports that she hates her body. 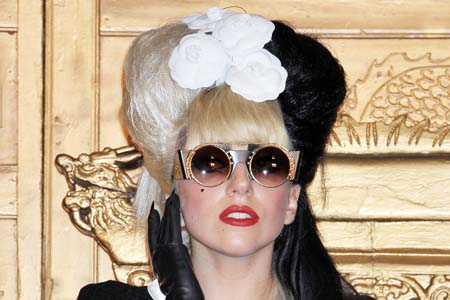 “Those who have worked with her on tour reported to me that Gaga barely ate for weeks at a time to fit into her costume,” investigative journalist Ian Halperin told Star. “She is sick and obsessed with her weight. One friend told me, Gaga will stare at herself in the mirror for hours on end, analyzing and critiquing her body. It’s an unhealthy obsession.”

Halperin added that the Edge of Glory singer uses her crazy wigs and costumes to detract from the Lupus-induced hair loss and red rashes. We’re calling shenanigans on this, though — she admitted to Larry King that she has the debilitating illness, but said she doesn’t suffer the side effects.

“Lupus is in my family and it is genetic. My mother told me the other day that my fans were quite worried about me because I did talk about the fact that I was tested for Lupus,” Gaga told the retired talk show host.

“And ah, the truth is, I don’t show any signs, ah, any symptoms of Lupus. But I have tested borderline positive for the disease. So, as of right now, I do not have it, but I have to take good care of myself.”

Another thing Lady Gaga is honest about? Her drug use. She’s admitted to taking cocaine and other drugs in the past, but Halperin said she’s done everything imaginable.

“Her drug use started young,” he said. “From heroin to cocaine and ecstasy, her friends say that she has done every drug conceivable. You name it she has done it. She’s morphed into this caricature called Lady Gaga, who isn’t even a real person. The girl known as Stefi to her friends and family has all but disappeared.”

Oh, Gaga: Just love yourself today, baby — ’cause you were born this way.

Lady Gaga explains what the bleep it’s all about
Lady Gaga: I did not steal from tsunami victims
Weird Al Yankovic and Lady Gaga bury their beef