Get ready for Suri Cruise to make her acting debut in Rock of Ages. 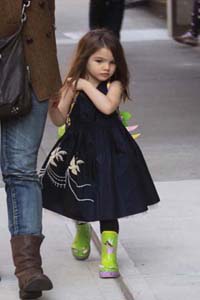 Get the baby lattes and star trailer ready: Suri Cruise is set to make her big screen debut! The five-year-old fashion plate will have a role in Tom Cruise’s new film Rock of Ages, according to sources.

People are saying that little Suri finally convinced Cruise and mom Katie Holmes to let her act. We think she just told her parents that she was going to star in the film. That’s just how Suri Cruise rolls.

How do we know that? An insider basically confirmed it to In Touch.

“Even though she’s only a kid, Suri gets to make her own decisions,” the family pal tells In Touch. “Tom and Katie [Holmes] would never push her into doing something she doesn’t want to do.”

Duh. How else can you explain her $100,000 tree house and $150,000 footwear collection? Suri calls the shots in the Cruise/Holmes household.

Daddy Cruise is playing womanizing rock star Stacee Jaxx in the big screen adaptation of the Broadway hit show, though there’s no word on what role little Suri might play.

The Rock of Ages production crew better get ready for Hurricane Suri. We have a feeling she’s going to create a new definition of a diva.

Just kidding. But seriously, Suri Cruise is the most fabulous tot on the planet.

Do you think Suri Cruise is too young for acting?