Actress Keri Russell is pregnant with her second child, her rep confirms. 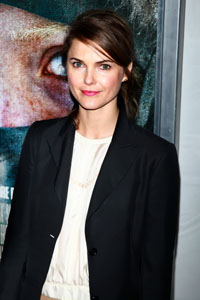 Babies will be Running Wilde in Keri Russell’s house soon — the actress is expecting her second child!

Keri Russell, 35, and her husband Shane Deary are eagerly anticipating their new arrival — as is big-brother-to-be River, who is four years old.

Russell recently told People that the work-home life balance that television work affords her is a dream come true for a working mom.

“I get to work really hard for three months but then I get to be home for four months where I get to put him to bed every night… I like getting to be in the adult world a little bit and then getting to be in the mom world and cook dinners,” she said. “And for me that balance is what makes it nice.”

However, the actress will be stepping off the small screen and into a movie role soon — and it’s connected to Stephenie Meyer of Twilight fame. Russell has been named as the star of the upcoming film Austenland, in which she plays a woman so obsessed with the fictional Jane Austen character of Mr. Darcy that she heads to an Austen-themed resort to find true love.