Casey Anthony was sentenced today for her four convictions for providing false information to law enforcement, but she won’t be in jail for long.

The discussion about the Casey Anthony not guilty verdict continues, as Casey Anthony was sentenced to four years in prison today. Judge Belvin Perry handed down the four-year sentence for Anthony’s four convictions for lying to police — one year for each count, to be served consecutively. 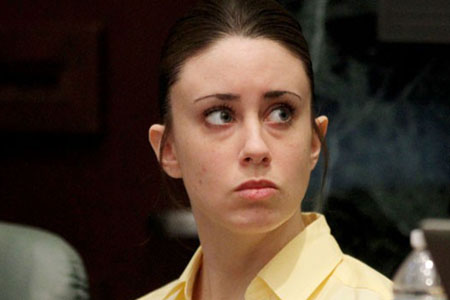 Anthony was also slapped with a $1,000 fine for each count and court costs. But we’re guessing that with all of the money-making opportunities waiting for her, such as an advice book, those fees won’t be a big deal.

So, how much longer can Anthony expect to be in jail? Not long. In fact, Anthony could be released as soon as late July or early August. Judge Perry is working on the math.

“We’re gonna figure out her credit for time served. It’s going to take us about an hour to sort it out because of the previous sentences she has been given,” Judge Perry said, according to CBS. “But with the good time and gain time, depending on preliminary figures, sometime early August. Maybe late July. But I can’t say that until I first determine time served. And then the jail has to apply, according to their figures, their good time and gain time that she has gained in this.”

On Tuesday, Anthony was found not guilty of first-degree murder, aggravated child abuse and aggravated manslaughter. Everyone has an opinion on the acquittal, from moms on both sides of the fence to celebrities.

Regardless of Casey Anthony’s exact release date from prison, you can be sure we’re not done hearing about her.