Adam Sandler and Kevin James will once again share the big screen — at least their voices will — in the Sony Pictures animated movie Hotel Transylvania. 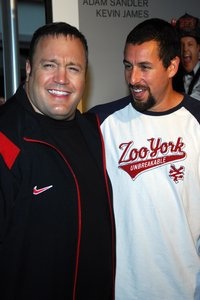 Sony Pictures Animation released the big 3D animated news on Tuesday. Hotel Transylvania will also include Kevin James and Fran Drescher as some pretty interesting characters — Frankenstein and the bride of Frankenstein.

Guess who else is lending their voices to the animated hotel party? None other than Cee Lo Green, Steve Buscemi, Andy Samberg, Molly Shannon and David Spade.

Here’s the fun part about Hotel Transylvania: It’s all about Dracula’s “five-star” hotel for monsters, which also doubles as a protective place to keep his daughter away from humans.

“We’re thrilled to be working with Adam to create a comedic Dracula for a new generation,” Sony Pictures Animation president of production Raimo-Kouyate told OnTheRedCarpet.com.

He added, “We have a unique story about that iconic character, starring a phenomenal cast directed by Genndy Tartakovsky, that re-imagines Transylvania and its legendary monsters in the way that only animation can.”

You may remember Adam Sandler, Kevin James, Steve Buscemi and David Spade teamed up for the comedy hit Grown Ups and James is getting ready to hit theaters with Zookeeper.

Hotel Transylvania is scheduled for release on September 21, 2012.