NBC’s upcoming sitcom Are You There, Vodka? It’s Me Chelsea has been hit by a shakeup, and not the kind that comes with an olive. Laura Prepon is still on board as Chelsea in the comedy inspired by comedienne/talk show host Chelsea Handler and her best-selling book, but three of her costars are out! 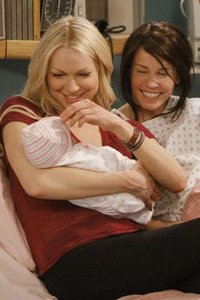 NBC’s Are You There, Vodka? It’s Me Chelsea follows the early exploits of 20-something bartender Chelsea (Laura Prepon, That ’70s Show), a strong-willed force of nature who will one day become the Chelsea Lately comedienne/host we all know and love. Chelsea’s friends are along for the ride, but with the show aiming for a midseason premiere, three of them are getting a makeover.

Natalie Morales (White Collar, Parks and Recreation), Angel Laketa Moore (ER) and Chelsea Lately contributor Jo Koy have been dropped from the cast for creative reasons, according to TV Line and THR.

Morales was to play Chelsea’s feisty best pal, Ivory; while Moore and Koy played Chelsea’s work friends, witty bartender Mark and sassy waitress Shoniqua. Perhaps they were just too feisty, witty and sassy for the show’s own good… Though from the preview below, the chemistry actually seemed to be working.

The rest of the cast is sticking around, including star Prepon as Chelsea; Mark Povinelli (Water for Elephants) as wry bartender Todd; Lauren Lapkus (The Middle) as Chelsea’s sheltered, shy roommate Dee Dee; Lenny Clarke (Rescue Me) as Chelsea’s dad Melvin and Handler, herself, as Chelsea’s sister Sloan and one of the show’s exec producers.

Are You There, Vodka? Before the Shakeup

Here’s NBC’s first look at Are You There, Vodka? It’s Me Chelsea, with Natalie Morales, Angel Laketa Moore and Jo Koy still in the mix.