We all know that the Harry Potter movie franchise is coming to an end. This weekend, a few friends and I started reminiscing about our favorite moments from the past films. Yes, there are far too many to count, but I’ve come up with my own personal top 10. We’d love to hear yours!

”You’re a wizard, Harry!”
Hagrid tells our boy hero that he’s got a whole new life ahead of him. And that moment changes everything… not just for Harry (Daniel Radcliffe), but for the entire world. How many children have dreamed of such a moment? Someone comes in and tells them they’re special. That magic exists in the world. That all the hardships they’ve suffered in life are because they really belong somewhere else. Be honest. How many of you secretly hoped an owl would come for you on your 11th birthday? 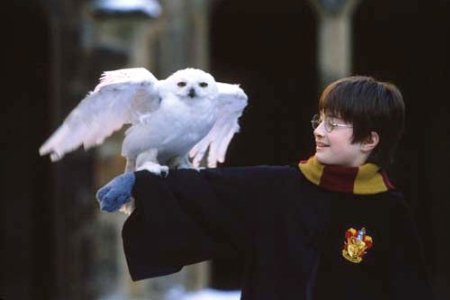 Professor Umbridge and the dragon
She was cruel to Harry, she wore far too much pink and that little throat-clearing thing made you want to smack her with the sword of Gryffindor. Professor Umbridge ruled Hogwarts with an iron fist until the students revolted. By far one of the best moments of the franchise was to see the fireworks dragon that Fred and George Weasley created chase the kitten-plate-loving Umbridge out of Hogwarts for good. 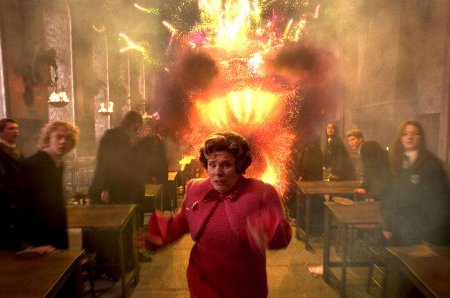 Harry and Ginny — dress zipping always leads to something
The budding romance doesn’t get nearly as much play in the books as I would have liked. (Though I certainly understand why. There are a few other things to write about… like battling evil wizards.) The beginning moments of the relationship may not feature prominently on the page, but a moving picture is worth more than a thousand words and boy oh boy do we see the attraction in those moments from the most recent film. Dying to see what they show in this one! 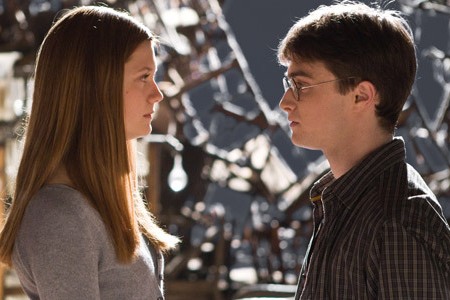 Professor Lupin and the bogart dance
The Riddikulus charm lesson in Lupin’s class is one of my favorite moments of the whole franchise. Music playing while everyone overcomes their greatest fears. Hey, if I were going to take on my own fears, I’d want a soundtrack as well.

True love forever
Poor Ron (Rupert Grint) ends up in a hospital bed and calls out Hermione’s name instead of Lavender’s. Honestly, how he put up with being called ”Won won” is beyond my comprehension.

Pow! Right in the kisser!
Amid the time turner plot in The Prisoner of Azkaban, Hermione (Emma Watson) drives her fist directly into the face of bad boy Draco Malfoy (Tom Felton)… right in front of his cronies! If you’ve ever given your enemy what for, or wished you had the opportunity, this moment has to be on your list as well.

Luna Lovegood for president
This is a character I’d love to have seen more of. We all love her in the books, but in the films, she’s amazing! The entire thestral scene… her speech, feeding the baby some meat… just brilliant. Anyone else want to see a spin-off book about her?

What could have been
The dancing scene in the tent from Harry Potter and the Deathly Hallows Part 1 wasn’t in the books, but there were certainly moments where something could have switched for Harry and Hermione. We know there are a bunch of you shippers out there who still think they should have hooked up. That dance to the Nick Cave song gives you a little peek at what you wanted to see… a Hermione and Harry hook-up. If that wasn’t enough, you got to see Ron’s nightmare about that with a half naked, shiny H&H smooch later in the film.

Sirius Black forever!
It’s a weird moment to put in for a top 10 because it’s so sad, but the death of Sirius Black can’t be left off. There is no big speech. No ”I’ll love you forever” moment. No closure. He’s just gone, the way people sometimes go in real life. It’s a changing moment for Harry. And I’ll admit, every time I watch, I hope that I’m in a parallel universe and it will be different. Sniff. 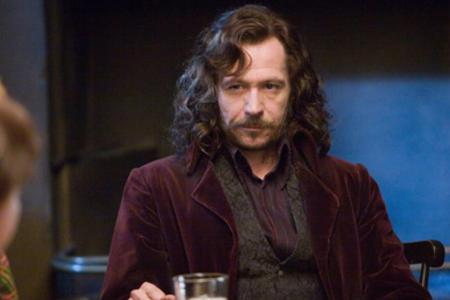 Mystery moment
I can’t believe there are people out there who haven’t read the books, but since I don’t want to spoil it, I’ll say this. I already know that the final moments of the final film (it hurts to write that) will be on this list. Book readers, you know what I’m talking about. Leave us your favorites below and try not to spoil the final film for those who don’t know what’s coming.

Harry Potter and the Deathly Hallows Part 2 will hit theaters on July 15, 2011.