Cy Waits has broken his silence on his split from Paris Hilton — and it ain’t pretty. 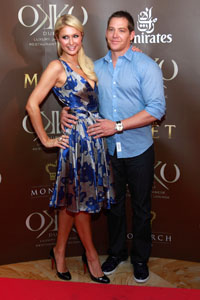 Paris Hilton announced her split from Cy Waits on national television, but her former flame took the high road and remained silent — until now. And from the sound of it he’s been itching to spill his guts, because what he had to say is not exactly flattering.

While attending the Electric Daisy Festival in Las Vegas, Cy totally threw Paris under the bus and basically called her an untrustworthy, lying druggie for whom he has little respect. In as nice a way as possible, of course.

Waits told People, “In my next relationship I expect honesty, strong values, true communication, commitment, mutual trust and respect, something I didn’t necessarily have recently.”

“At the end of the day, I want my partner and I to have the same ethics.”

It gets better! He continued, seemingly referring to Paris’ penchant for partying, and perhaps more specifically to their arrests for DUI and cocaine possession last summer, “When I’m involved with someone, my focus is keeping them safe, trying to keep them out of trouble and always being supportive. Partying is not my thing. I live a healthy lifestyle. I avoid drugs. I have a social cocktail every now and then.”

“I don’t want to speak for Paris, but this breakup is something I knew for a number of months needed to happen –- and we finally saw eye to eye. I need to get back to focusing on my career.”

Waits was fired from his job as head of nightclub operations for the Wynn and Encore properties in Vegas following the couple’s arrests, while Paris was permanently banned from the resorts.