Last week we were blown away by the record-breaking debut of Transformers: Dark of the Moon but it’s time for a change of pace. Fewer explosions and more laughs will dominate theaters this weekend thanks to Horrible Bosses and Zookeeper.

With Horrible Bosses and Zookeeper, you get what you pay for. Both titles are self-explanatory and they’re supported by all-star casts. Bosses features Jason Bateman, Jennifer Aniston, Colin Farrell, and Kevin Spacey, while Zookeeper has Kevin James, Rosario Dawson, Leslie Bibb and the voices of Sylvester Stallone and Cher! 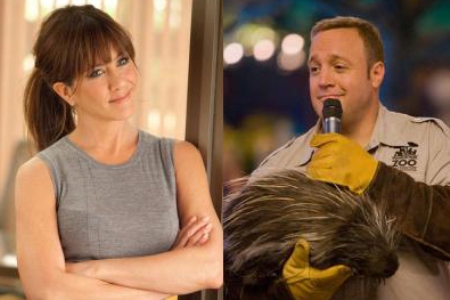 Horrible Bosses centers on three disgruntled employees (Bateman, Jason Sudeikis, Charlie Day) that are fed up with their obnoxious bosses (Aniston, Farrell, Spacey), so they come up with a Strangers on a Train-type plan to kill them. They get some much-needed advice from a professional hit man (Jamie Foxx) and hilarity ensues. What could possibly go wrong? A lot!

As for Zookeeper, it falls in line with Dr. Doolittle and other “talk-to-animals” movies. Kevin James plays the title character that can speak to and understand wild creatures. They’re able to give him dating and career advice and he’s their voice to the outside world.

These are two different films that have one thing in common — they’re funny! But if neither one of them tickles your funny bone, you can still check out the Cameron Diaz flick Bad Teacher, which is hot in theaters.