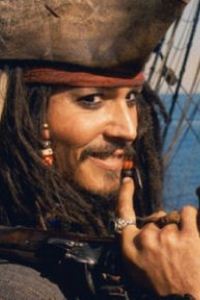 Johnny Depp is “closing in” on his deal to return for Pirates 5, according to The Wrap. Seems like a good time to finish up talks!

Since On Stranger Tides dropped in May, there’s been chatter about the team coming back together for Pirates 5. With Depp “in talks,” Jerry Bruckheimer made it clear he was in for another installment and Terry Rossio turned in his script for a fifth installment, without former Pirates co-writer Ted Elliott, according to THR. There were also rumblings that Disney was talking with On Stranger Tides‘ director Rob Marshall.

Now, word is the script is in and getting a serious makeover, according to The Wrap, with Bruckheimer and team meeting several times a week to clean it up.

But what about Jack?

For all this effort, there’s no Pirates of the Caribbean 5 without Depp. Luckily, he’s been very clear about his enthusiasm over playing Jack Sparrow, as long as the scripts are meaty. So what’s the hold-up?

Not likely money! Depp has received $350 million from playing the role over the years, according to The Wrap sources. Disney denies that outlandish figure, but whatever it actually is, Depp has certainly enjoyed a good haul and it’s doubtful this waiting game has anything to do with money.

The issue is that Depp is one of Pirates’ biggest fans, so he doesn’t want to rush things. “It’s not something where I would say, ‘Let’s shoot it next month to get it out by Christmas 2012,'” he told THR in May. “We should hold off for a bit. They should be special, just like they are special to me.”

Assuming the script and release date are copacetic with Depp and he signs on, there’s no word on whether Orlando Bloom and Keira Knightley or Penelope Cruz will return. Bloom and Knightley didn’t make it back for Stranger Tides, but who knows? As for Cruz, if she does come back, fans shouldn’t expect to see the love affair between Sparrow and Blackbeard’s daughter Angelica go anywhere.

“I think if we did a scenario where it was Captain Jack really falling in love, it would most likely be a silent film. I think he would go completely catatonic and be unable to speak,” Depp told MTV. “He would probably sit there and quiver for an hour and a half… It would mess up the legend — which I think is always working for it, to leave the legend behind.”

SheKnows is quite sure the legend will continue, so stay tuned for more on Pirates 5!