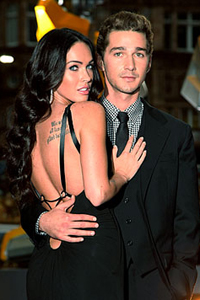 Shia LaBeouf apparently couldn’t help himself when asked by Details if he hooked up with former Transformers co-star Megan Fox.

And when asked if she was with her now-husband, Brian Austin Green, when they hooked up, he may have realized the seriousness of his confession as he stumbled over his words, saying, “I don’t know, man,” 12 times.

As it turns out, Fox and Green were on a break when she hooked up with Shia (they married June 2010) but his confession has reportedly caused some conflict in their marriage.

“Megan’s been in tears, and is apologizing to Brian — even though technically she didn’t do anything wrong since they were on a break… They are so angry at Shia,” a source tells OK Magazine.

No word if Shia has apologized directly to Fox, however, he told Access Hollywood he is learning to keep his mouth shut. “I just turned 25,” Shia said. “And I’m learning how to edit myself and say ‘no comment’ now.”

Shia is back in theaters for Transformers: Dark of the Moon with Fox’s replacement, Rosie Huntington-Whiteley.

33 mins ago
by Reshma Gopaldas