Oprah Winfrey is a media mogul worth billions — and she plans on teaching high school students in South Africa how to follow in her footsteps. Where do I sign up?

Oprah Winfrey’s Leadership Academy for Girls in South Africa has had its issues in the past, but it sounds like the school she founded is now on the right track — and Oprah even plans on teaching a class there in the fall! 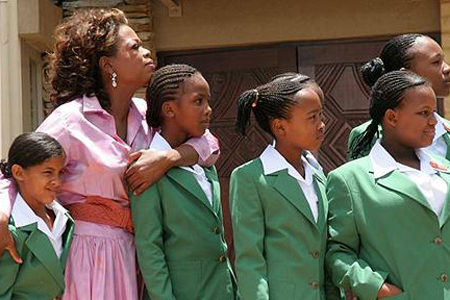 She said she plans on teaching a class called “It’s Life 101” about “all the stuff she wished someone had told her about how the world really works.” Does that include how to be a media mogul worth billions? It sure sounds like it!

“When Chris Rock was last on the show he said, ‘Real wealth is having options.’ I thought that was pretty profound,” Oprah revealed. “I now stress to my girls that education prepares you to have options. Without it you have none. Just took a walk around the neighborhood watching sprinklers on the back lawn (I love sprinklers). Made me think about the red dirt road I traveled from Mississippi (no sprinklers) to the here and now… And how that journey could have only been possible in the USA.”

I can’t imagine a better role model than Oprah Winfrey herself — and she sounds like she is really enjoying bonding with “her girls,” as she likes to call them.

“Should be fun since I love to teach. And they’re like sponges,” she said. “Like 12th graders everywhere, this first class is both anxious and excited about going to college. Most will be the first in their family. So it’s a very big deal for them, and they’re feeling the pressure.”