Miley Cyrus is dumbfounded that our laws protect accused child killers like Casey Anthony instead of encouraging love, like gay marriage. 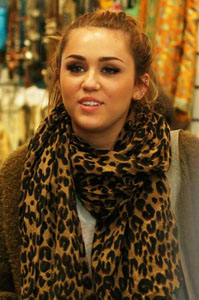 Miley Cyrus is getting political. The teen entertainer is aghast that laws protect people like Casey Anthony, who although acquitted of killing her daughter Caylee was convicted in the court of public opinion, while not allowing more love in the world by legalizing same-sex marriage.

Miley made her statement on Twitter. “You know the world is skewed when people get away with murdering children but we cant get gay marriage legalized in the state of California,” she wrote.

Despite — or perhaps because of — her belief in Christianity, Cyrus has been a longtime proponent of gay rights. Back in 2009 when Perez Hilton was feuding with deposed Miss USA Carrie Prejean over her anti-gay marriage stance, Miley tweeted her support.

“Jesus loves you and your partner and wants you to know how much he cares!” she wrote back then. “I am a Christian and I love you — gay or not. Because you are no different than anyone else! We are all God’s children!”

Cyrus recently spoke out against the retailer Urban Outfitters for donating cash to the campaign fund of gay-hating Pennsylvania Senator Rick Santorum.