Lily Allen’s bird’s-eye view of the celebrity world has led her to speak the truth about those ultra slim stars we look up to. Is Hollywood’s best kept secret finally out? 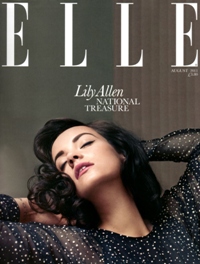 Songstress Lily Allen has made some big claims in the latest issue of British Elle. The newlywed, who exchanged vows with Sam Cooper on June 11, says svelte Hollywood bodies aren’t just the work of a gym routine as they’d like us to believe.

Lily Allen divulged, “I hang out with models, the biggest pop stars and, you know, really and honestly, I hate saying this, but none of them are achieving those body shapes by being healthy.”

She continued, “They’re not just going to the gym two hours a day. They’re not eating or they’re taking speed not to eat. In America everyone abuses that Adderall stuff and people aren’t normal.”

Unfortunately an unhealthy lifestyle is something Lily Allen knows firsthand. Reflecting back on the period after her child was stillborn in 2010, the 26-year-old shared, “I wasn’t eating then, you know, [I was] going out at night. I guess when you’re not eating you have to distract yourself with other things. Come three o’clock it was like, ‘Oh I suppose it’s acceptable to have a glass of wine.’ And then by four o’clock I would have had four glasses. It’s not the way to be.”

The man she married, and is currently expecting another child with, gets the credit for getting Lily Allen on the right path once again. “But then I met Sam and he noticed that behavior,” she says. “I think it came to a point for him where he was thinking, ‘Can I be with this girl if this is what her life is like? I want to make this work, but I can’t live in this world.’ I just needed someone to tell me.”

Best wishes to Lily and Sam for a safe pregnancy and arrival of their child!

What do you think of Lily Allen’s celebrity diet and drug claims?