Paris Hilton is freaking out after a stalker broke a restraining order and was found lurking outside her Malibu beach home. 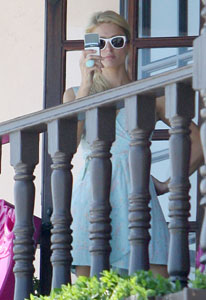 Remember that crazy dude who attacked Cy Waits outside a courthouse in April in a bid to get close to Paris Hilton? He’s back. James Rainford has been arrested again after peeping into Hilton’s Malibu beach home.

A neighbor saw Rainford peering into Hilton’s house and recognized him from news reports. When cops arrived they found the man sitting shirtless on the beach and took him into custody, as he was too close to Hilton’s home. The restraining order requires him to stay at least 200 yards away.

Paris stood on her balcony snapping photos of the arrest with her cell phone as it all went down.

Rainford has a long history of stalking Paris: He was arrested when he snuck onto her property in October 2010, just months after a knife-wielding would-be kidnapper was nabbed by Waits. He also proposed to Hilton at a media event in February 2011.

Now that Paris and Cy have broken up and she doesn’t have his ninja skills to keep her safe (seriously, that guy was like a one-man security force), the reality star is taking no chances with her safety. Hilton has hired four armed guards to patrol her beach house all summer long and she installed a new security system with cameras and motion detectors around the property.

This coming from a woman who was repeatedly robbed because she left her door unlocked. Glad she’s learned her lesson, but sad it had to be in such a scary way.