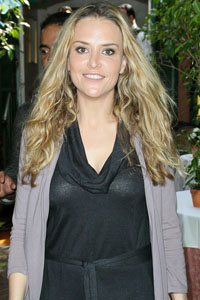 Brooke Mueller won’t be attending ex-husband Charlie Sheen‘s Comedy Central Roast, but she has announced that if any of the night’s comics criticize her or even mention her name, she’ll file a lawsuit against them.

“He better not go there,” Mueller warned the crew that’s lined up to mock Sheen for the upcoming TV show. If she gets her way, her name will be “completely off-limits,” and her lawyer may be considering sending the show a letter letting them know if Mueller does get mentioned, Sheen’s roasters will end up in court.

Comedy Central doesn’t seem too concerned. They say that, as far as they’re concerned, it’s anything goes when it comes to roasting Sheen.

“Charlie has assured us that nothing will be off limits in this Roast which scares even us,” a network representative said.

The divorce settlement that Sheen and Mueller, who are parents to twin boys Bob and Max, agreed to dictates that Sheen cannot publicly talk about Mueller or her substance abuse problems, but at Sheen’s roast, the comedians would be doing the talking, and, we assume, they’re exempt from the divorce agreement’s rules.

The roast isn’t until September, though, so it seems both sides have some time to work things out — or not. The show will air on September 19, the same night that a newly refurbished Two and a Half Men returns to the airwaves, without Sheen.

“You could say I’ve been providing kindling for this Roast for a while,” Sheen has tweeted of the roast. “It’s time to light it up. & It’s going to be epic.”