America’s Got Talent hit Vegas this week, but not everyone got to perform during the round that decides who gets to go to Hollywood. Read on to find out why Dani Shay is more than a Justin Bieber look-alike — she totally deserved to go to Hollywood.

America’s Got Talent began the all-important Vegas round Tuesday night and a few standouts caught our eye. 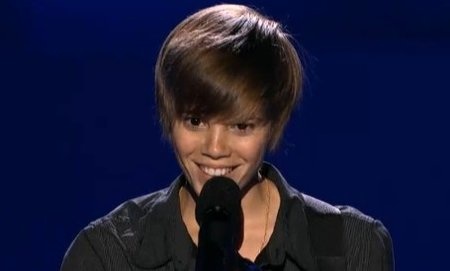 While some acts were immediately sent to Hollywood without having to perform in Las Vegas, other America’s Got Talent acts had to battle it out in front of Sharon Osbourne, Howie Mandel and Piers Morgan in order to move on. As act after act impressed the judges, two very different acts got our attention.

First, pole dancer Steven Retchless wowed us with his beautiful turn on the pole. Steven Retchless’ audition that got him to Vegas was more pole and less grace in our opinion, but this week he proved that he had the grace and beauty to put together an artistic performance centered around a unique platform. Check out the video to see why we were moved by his act and why he deserved to go to Hollywood.

The second act that really had us taking notice was Dani Shay — because she looks like Justin Bieber. Dani Shay showed up to her original audition with a Justin Bieber parody song up her sleeve. This week she counted on an original ballad to get her to Hollywood, but the judges weren’t impressed. They still had her Justin Bieber parody on the brain. They sent her back to learn a better-known song and she gave a stellar version of Trouble. Check out her video below.

The America’s Got Talent judges felt they might have been unfair pushing her to do something they wanted rather than what she wanted. She pled her case for being a songwriter and how much it means to her. Dani Shay gets our props for sticking to her guns and getting sent to Hollywood. Check out her original Bieber parody and tell us which version of Dani Shay you like better — the parody girl or the serious songwriter?