Rihanna says she is ‘open to love’ but is tightlipped about her rumored new boyfriend Drake. 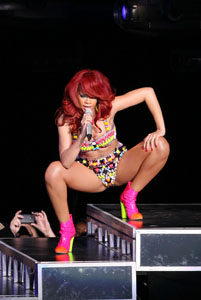 Let’s face it: Rihanna hasn’t exactly been lucky in love. Now she tells British Cosmopolitan that she would like to have a man in her life, but most are intimidated by her success.

“I’m open to love,” she told the magazine. “But guys should have to earn it. Because the minute they get it, they want something else.”

“Men are like hunters; they like the chase. So you have to keep ’em guessing. Actually, I’m like that too. I get bored quickly. So if someone can make me laugh, that’s the best.”

The California King Bed singer says it doesn’t help that she is so successful.

“It can definitely be intimidating to guys to date someone in this industry. And it’s really hard to find a guy who doesn’t care about that stuff.”

“Right now, it’s easier just having my career to focus on.”

Make that her career and fellow artist Drake. While both are being quite tightlipped about their relationship, they have been spotted getting awfully cozy in Canada. The pair was romantically linked once before, back in 2009 — and Drake said after the fact that she totally played him.

“You know what she was doing to me? She was doing exactly what I’ve done to so many women throughout my life, which is show them quality time, then disappear. I was like, wow, this feels terrible,” he told the New York Times.

For her part Rihanna is denying a new romance with Drake. When asked by a fan on Twitter if the two were dating, she replied, “Nah, Boo.”

read on for more rihanna