Turns out it wasn’t Just a Kiss after all — Lady Antebellum singer Hillary Scott is engaged to drummer boyfriend and musical muse Chris Tyrell. 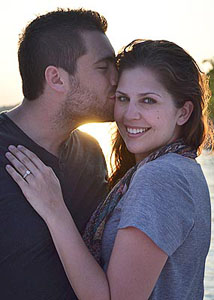 “Chris proposed exactly the way I’ve always dreamed,” Scott told People. “Our families were close by, but it was just us out on a beautiful deck overlooking a lake in East Tennessee. We had just been on a hike and — in our workout clothes — he hit the knee! We feel so blessed by God that He sent us each other, and we are looking so forward to forever together!”

Check out more celebrity hookups, breakups and babies on SheKnows

The happy couple met in early 2010 when both Grammy Award-winning Lady Antebellum and Tyrell’s band Love and Theft were opening for Tim McGraw. Tyrell then became the lead drummer for Scott’s band, and the two are absolutely adorable together.

So when’s the wedding? No decision yet — Lady Antebellum is currently headlining a summer tour and they have a new album out in September. Tyrell is currently drumming for Eden’s Edge on the Brad Paisley H20 II tour.