Ashley Tisdale celebrated her birthday this weekend with friends, family, and hottie Zac Efron. SheKnows has all the details.

Is Ashley Tisdale hooking up with her bestie Vanessa Hudgens’ ex-boyfriend Zac Efron?! 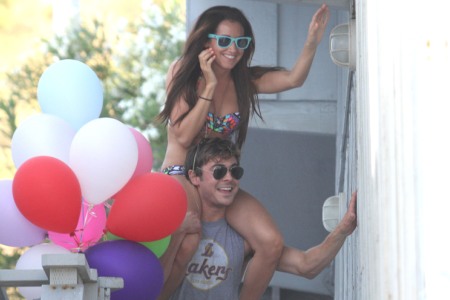 It sure looks like it from photos of the two splashing around in the ocean together, holding hands and draping themselves over each other this weekend at Tisdale’s 26th birthday party.

“Ashley and Zac had a High School Musical reunion at the party and frolicked in the ocean together,” an eyewitness told SheKnows. “Zac even kept giving Ashley piggy back rides.”

But the birthday girl was quick to clear up any misconceptions on her big day by tweeting, “So happy zacary made it to my party!!! He’s my brother/best friend!!!”

They looked like a little more than friends if you asked us! Still, a source tells SheKnows their play was purely platonic and the two are absolutely not dating. If that isn’t enough proof, Tisdale’s boyfriend Scott Speer was also in attendance and by her side most of the party.

Tisdale was clearly irked by the implication that she and Zac were anything more than good buds, and took to Twitter again this morning writing, “Don’t believe all pictures. People r gonna come up with stuff to say bc it sells! I had such a great birthday party with my friends, Family, and BOYFRIEND Scott. I will not let stupid rumors ruin all the fun we had! Xoxo.”

The bash was thrown at a private beach house in Malibu and Ashley prepped for the festivities by getting a spray tan from Tempu. Her guests were treated to Heineken Light, VnC Cocktails and a cake with a huge bikini on it.

For more on WHat celebs did this weekend:

48 mins ago
by Alicia Kort