Kim Kardashian is speechless and confused over the Casey Anthony verdict while actress Mindy Kaling hopes the case moves to civil court. 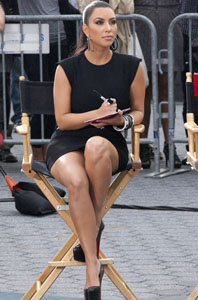 Celebrities chimed in on Twitter about the acquittal of Casey Anthony in the death of her two-year old daughter, Caylee, moments after the decision was read.

The comments were succinct, if not constructive.

“WHAT!!!!???!!!! CASEY ANTHONY FOUND NOT GUILTY!!!! I am speechless!!!” tweeted an, er, speechless Kim Kardashian, who previously opined that Anthony was guilty.

The reality TV star composed herself about 40 minutes later.

“I am truly sick over the Casey Anthony verdict!” Kardashian said. “So if the courts don’t believe she is guilty then who do they think killed this little baby?”

She finally admitted she was “confused.”

Rocker Nikki Sixx of Motley Crue called the decision a failing of our legal system.

“I am ashamed and shocked that our legal system failed us and found Casey Anthony not guilty for killing her daughter or any other charges,” Sixx said.

Actress Mindy Kaling from The Office was hopeful that the case would move to civil court.

“Anyone else hoping Casey Anthony is stupid enough to sue herself for millions in a civil court?” Kaling said.

From the comedians’ corner, Russell Peters wondered about Anthony’s choice of music now that she’s free and Fred Willard was philosophical about the verdict.

“Now that Casey will be free… where will she go?” Willard said.

Well, Anthony still has some legal issues to clear up as she was found guilty on four counts of providing false information to police.