Harry Potter and the Deathly Hallows Part 2 is finally landing and you can get on the red carpet — online that is! Livestream is giving fans access to the world and U.S. premiere red carpets, with Daniel Radcliffe, Emma Watson and Rupert Grint, plus J.K. Rowling and the rest of the team behind the eighth and final Potter installment.

As muggles far and wide prepare for the end of the end of Harry Potter’s adventure, Livestream is doing its magic to bring everyone together for both the world and U.S. premieres of Harry Potter and the Deathly Hallows Part 2. Get online for the red carpet in London and then in New York! 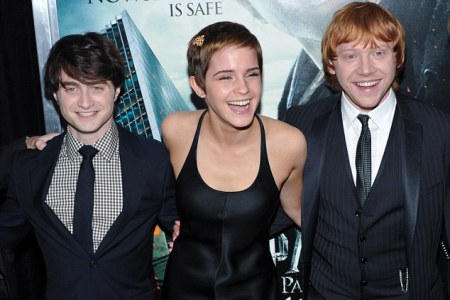 Livestream will be streaming both red carpet premieres and promises face time with stars Daniel Radcliffe, Emma Watson and Rupert Grint, as well as time with creator J.K. Rowling, director David Yates, producers David Heyman and David Barron, and more. While fans watch the action, they can also get on social networks like Facebook and Twitter to dish with other fans about who has the coolest wand on the carpet, who showed up with a new witch on his arm and who suffered a horribly embarrassing cape malfunction.

Those fans who are too sad to watch this end of the end, remember, there’s still that Deathly Hallows documentary coming: British filmmaker Morgan Matthews went behind the scenes with Radcliffe, Grint, Watson and the Potter crew to create a documentary around the final Potter films.

The world premiere red carpet event will take place on Thursday, July 7 at 11 a.m. EST, in London’s Trafalgar Square and Leicester Square. Viewers can treat themselves to the live three-camera stream here.

AP Live will stream the festivities from the U.S. premiere red carpet at New York City’s Lincoln Center on Monday, July 11 at 5 p.m. EST/2 p.m. PST. Viewers can ‘be there’ by tuning in here.