Want to know the quickest way to rile up Lady Gaga? Imply that her gay rights work is all just a ploy to increase record sales. 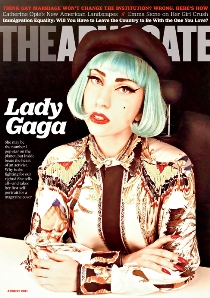 Lady Gaga turned photographer for this month’s self-portrait cover of The Advocate and opened up about claims her passion for gay rights is all a sham to make a buck. The singer, who says she identifies with the ‘b’ part of the LGBT (lesbian, gay, bisexual, transgender) community, wants to make clear that profits are not her top priority.

“To say that I would use the gay community to sell records is probably one of the most ridiculous statements anyone can make about me as a person,” Lady Gaga said in a new interview. “I would say the top thing I think about every single day of my life, other than my fans, loving the music, and my family being healthy, is social justice and equality.”

The tale of a recent encounter with a 20-something gay serviceman whom Lady Gaga bumped into while shopping illustrates her passion for helping people.

“And we just held each other and cried,” she continued. “Anyone who says that I’m not genuine is not interested in overcoming this fight. That was such a pure and wonderful moment that we shared, and I remember thinking, There’s no album sale, no number 1, that could compete with this moment.”