Jennifer Aniston has done it, successfully chucked her good girl persona out the window with her performance in the comedy Horrible Bosses.

She is foul mouthed, abusive and most outrageously awesome. Jennifer Aniston recently visited with us at the Waldorf Astoria in Manhattan and talked about whether she’s had any Horrible Bosses, plus any worries she had about shedding the “America’s Sweetheart” label with this bad-to-the-bone role. 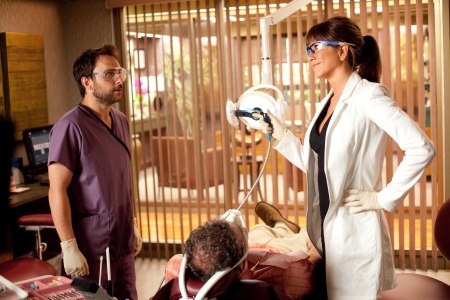 Aniston strolls into the room looking fabulous in her Tom Ford skirt, a Calvin Klein top and Michael Kors shoes.

SheKnows: Was there any part of you that joined this cast to rid yourself of the America’s Sweetheart moniker?

Jennifer Aniston: There are so many different American Sweethearts. I didn’t take the role to rid myself of that title. I took it because I loved it and thought it would be a fun challenge and fun for me to step out of what people usually like to see me play. That’s a label; you know you’re branded, you’re given things, and things are attached to you… but no, I didn’t. 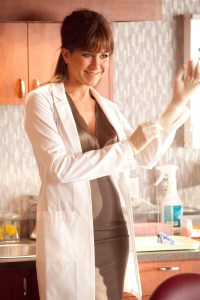 SheKnows: Do you feel there was any risk in you tackling the role of a sexually aggressive woman in Horrible Bosses? Did you have to run this by SmartWater [laughs]?

Jennifer Aniston: Yes, I consulted SmartWater — I’m joking [laughs]. You don’t want to play it safe all the time. The risk is the fun. And I’ve never sort of had a script come to me that allowed me to go in this direction. I don’t think I really cared if there was a bad reaction to it. I actually didn’t think there would be. I thought it would be fun for everybody — I’d hope. I felt it was a great opportunity.

SheKnows: What was your toughest job?

Jennifer Aniston: The toughest job I’ve ever had was being a bike messenger in New York City. I was 19.

SheKnows: What was your worst day as a bike messenger?

Jennifer Aniston: Probably driving into a door that was open [laughs]. I’m just very uncoordinated and extraordinarily klutzy. And I just never should have been allowed on a bicycle with cylinders.

SheKnows: Why did you change up your look for your role in Horrible Bosses? Your hair is much darker than usual, was that to reflect the dark comedy of the film?

Jennifer Aniston: I knew I wanted her to look different — with the dark hair. I was doing a movie right before and right after, so we had this wonderful period of time that we called hair-gate because the studio did not want me to wear a wig because the studio’s like, “No one will know who you are.” And I’m like, “What do you mean? They’ll know who I am because of my name on the credits.” There’s just no way I could be saying these words and playing this woman and not look that much different. I just felt such freedom. It was really fun for me.

SheKnows: While on the set, did you ever have a moment where you said, “I cannot believe these words are coming out of my mouth?”

Jennifer Aniston: I had no hesitation. Nothing happened where the director (Seth Gordon) wasn’t so tickled and excited. After every take he’d just be like, “The raunchier the better.” So, I’d say it was pretty easy. 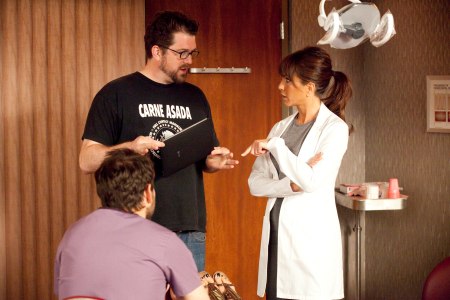 SheKnows: Do you think men are intimidated by older, sexually confident women like your character?

Jennifer Aniston: I think that men are intimidated by any woman who’s sexually confident, no matter what her age [laughs].

SheKnows: How do you see yourself as you get older? Do you notice any big changes?

Jennifer Aniston: Not at all. At the age of 60, I’m doing pretty good [laughs]. No, I think I absolutely get more comfortable in my body and my skin as I get older, more than when I was in my 20s — I was so awkward and uncomfortable.

SheKnows: Did you ever feel for your co-star Charlie Day for everything you were doing to him?

Jennifer Aniston: I just kept apologizing to Charlie for everything that happened. We got to know each other between straddling [laughs].