Transformers: Dark of the Moon blew out Fourth of July weekend, breaking $100 million over the four-day weekend — and that was just in the US! Amid the Transformers fireworks, Cars 2 continued to cruise but Larry Crowne didn’t make the top three.

The third Transformers installment nabbed good, but not explosive numbers after it dropped early last week, but didn’t manage to beat its predecessor, Transformers: Revenge of the Fallen. The same can be said of Transformers: Dark of the Moon’s big Fourth of July 2011 weekend run, even though it was one mighty run. 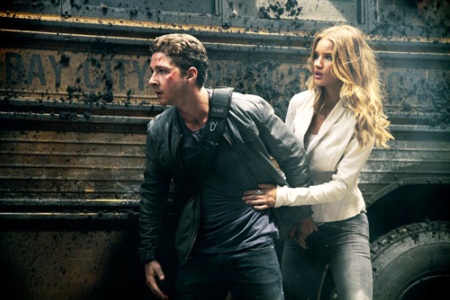 Counting Monday’s holiday, Transformers: Dark of the Moon banked $116.4 million, while the three-day weekend turned out a rocking $97.5 million. That was enough to usurp Spider-Man 2‘s former Fourth of July reign and take the crown for top-grossing 2011 weekend from Pirates of the Caribbean: On Stranger Tides.

With a total of $175.6 million over six days, Dark of the Moon ranks as the ninth highest opening ever. Even more impressive, since the movie opened last week, it has banked a total of $181.1 million stateside (including previews), plus an additional $218 million overseas. That easily covers the reported $195 million budget, and we’re still counting.

In spite of all these bragging rights, however, Dark of the Moon didn’t actually match Spider-Man 2 in attendance or manage to take down its own predecessor, Revenge of the Fallen. The second Transformers installment banked $214.9 million over six days, to Dark of the Moon‘s $181.1 million — and again, Dark of the Moon has the benefit of that 3D ticket price boost.

In spite of Transformers’ massive numbers, Cars 2 managed to stay in the game, banking $26.2 million in its second weekend, plus almost $6 million more on Monday’s holiday. Bad Teacher dropped to third with $14.5 million.

After what seemed like an endless promotion cycle with Julia Roberts and Tom Hanks, their rom-com Larry Crowne came in fourth with $13.1 million. Super 8 banked $7.8 million, after breaking the $100 million mark, to close out the top five.

Next weekend, the long anticipated Horrible Bosses finally drops, along with Zookeeper. Limited releases include Beats, Rhymes & Life: The Travels of a Tribe Called Quest, The Sleeping Beauty, Strand, The Chameleon, Chillar Party, Fading of the Cries, Ironclad, The Ledge, Project Nim, Roadside Attractions, Romeo and Juliet in Yiddish and John Carpenter’s The Ward.