Johnny Depp has done it again. The superstar and Walt Disney Pictures have hit the billion-dollar mark with another film. Their latest venture, Pirates of the Caribbean: On Stranger Tides, has joined a very exclusive club. 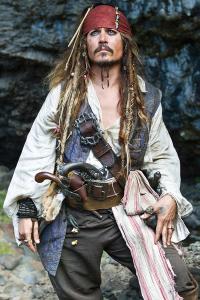 Pirates of the Caribbean: On Stranger Tides was released in theaters on May 20 and as of July 2 has become the eighth film in history to make over a billion dollars worldwide. It’s also become one of the top 10 highest-grossing films of all time.

Jerry Bruckheimer has worked on the Pirates franchise since the very beginning and he couldn’t be happier with the end result. “There can be no greater thrill or satisfaction than knowing that you’ve been fortunate enough to produce a series of films which have delighted millions all over the world.”

The four Pirates of the Caribbean films have earned a combined $3.68 billion in global box office. That’s not too shabby for a movie series based on a theme park ride.

Check out our interview with Johnny Depp for Pirates 4!>>