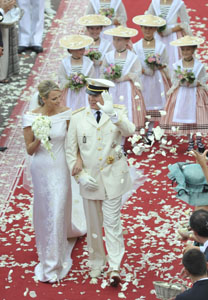 Glitz and glamour were the name of the game in Monaco this weekend as Prince Albert and Charlene Wittstock continued their wedding celebration with a formal religious ceremony and gala reception.

While Prince Albert and Charlene Wittstock married in a civil ceremony on Friday, Saturday’s celebration was all about the pomp of royalty.

Albert and Charlene attended the previous (and more elegant, in our opinion) royal wedding in April when Prince William married Kate Middleton, and while those newlyweds were unable to return the favor due to their current tour of Canada, Prince Edward and his wife Sophie, the Countess of Wessex, were there to represent the British royal family.

Check out this video of the reception, during which Princess Charlene changed into another beautiful gown:

The speech Prince Albert gave in honor of his new bride was particularly interesting considering the rumors that Wittstock was nearly a runaway bride and had to be persuaded back to the palace by Monaco police after possibly finding out about a third illegitimate child — Prince Albert already has two.

“The truth of the rumor is that Albert faces paternity tests following a claim by at least one former lover,” a senior palace official told the UK Telegraph.

“Even if a third or even a fourth child is confirmed, Albert will not have an official heir until Princess Charlene bears him one,” the official said.

Prince Albert and his new bride have been a couple since 2000.