Someone must have really ticked off Jersey Shore‘s Vinny Guadagnino! The housemate walked out of the cast’s Seaside Heights digs and he might not be coming back. 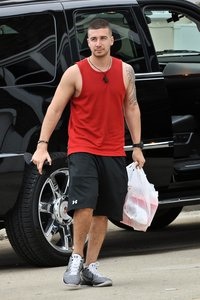 Tempers flare — a lot — on Jersey Shore but it looks like things might have gone a little too far for Vinny Guadagnino. Word has it, he got into a heated argument with an unidentified cast member and stormed out of the Jersey Shore house in the dead of the night (not the picture included).

The PO’d housemate is reportedly now licking his wounds at home with his family in Staten Island. The altercation could be the tip of the iceberg for Vinny Guadagnino. According to reports, he’s not been feeling Jersey Shore lately.

While filming season four in Italy, Guadagnino is said to have been dealing with a case of homesickness, which did not subside after the cast returned to start filming season five in Seaside Heights. In fact, he made a few grumbles about wanting to leave, but the rest of the cast got him to stay. Looks like they didn’t do a very good job of getting him to stay put for long. Vinny Guadagnino packed his bags and hailed a taxi back to Staten Island.

At this time, it’s looking like Vinny Guadagnino is gone for good and the only thing MTV is giving up is: “We don’t comment on series while they are in production but viewers can be assured they will have answers when Season Five premieres.”

Well, MTV recently said, “We currently have no plans to recast the show,” so if Guadagnino is gone for good, will anyone take his place?

Here’s our question to viewers of Jersey Shore: Could this be a clever tactic to keep us watching, and watching and watching, until we get the goods? Sound off in the comments section below.

Tune in to the season four premiere of Jersey Shore on August 4. We know, hearing that date really makes us realize season five is quite a long way off.