With a little less fanfare but no less glamour, Prince Albert of Monaco wed his longtime girlfriend Charlene Wittstock in the palace throne room today. 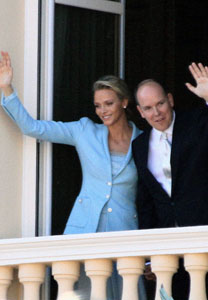 There’s a new beautiful blond princess in Monaco tonight. Prince Albert has wed his longtime girlfriend Charlene Wittstock in a civil ceremony that kicks off a weekend of festivities.

The one-time Olympian from South Africa wore a soft blue Chanel pantsuit for the legal ceremony, which will be followed by a traditional religious ceremony on Saturday.

After the ceremony, the bride and groom mingled with their subjects in the palace square for a cocktail party. After Saturday’s second ceremony, the couple will host a star-studded gala reception with a guest list including Karl Lagerfeld and Giorgio Armani — who reportedly designed Wittstock’s gown for Saturday — as well as Naomi Campbell, Sir Roger Moore and Nadia Comaneci.

Prince Albert, 53, met the 33-year-old Wittstock in 2000 and the couple became engaged a year ago. He has two children out-of-wedlock with two different women and had long been considered a consummate bachelor. He rules over the six square mile principality where his American-born movie star mother, Grace Kelly, became a princess.