Maria Shriver has filed for divorce from Arnold Schwarzenegger six weeks after he publicly admitted to fathering a secret love child with the couple’s housekeeper. 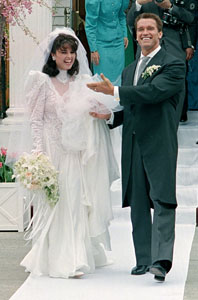 Maria Shriver has terminated her marriage — the Kennedy heiress has filed for divorce from Arnold Schwarzenegger after 25 years of marriage.

In the paperwork, Maria asks for joint custody for the two of their four kids who are still minors. She also wants spousal support and for the Sperminator to pay her legal fees.

While the marriage has reportedly long been troubled, the straw that broke the cheater’s back was the shocking revelation that Schwarzenegger fathered a secret love child with the couple’s housekeeper.

The court documents also state that the couple had no prenup, so everything Arnold made from 1986 on will most likely be split 50/50 under California law. While Maria had a successful journalism career until her duties as first lady of California necessitated her resignation from NBC, Arnold’s Hollywood earnings far surpassed her own income.

The official date of separation is not listed on the papers, but it is thought to be weeks — or even months — before Shriver and Schwarzenegger announced their split.

read on for more maria shriver