The Smurfs make their big screen debut July 29 and SheKnows was given a first-hand account behind bringing the animated legends to life on the big screen. We visited with stars Jayma Mays and Hank Azaria, practiced the art of animation, recorded our own lines to the Smurf movie in Sony Animation’s studio and saw clips from the upcoming live action-animated film.

Producer Jordan Kerner tells us that when beginning the effort to bring The Smurfs to the big screen, he and director Raja Gosnell visited some other blue creatures’ set. 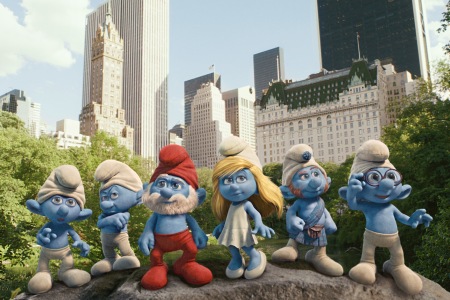 “I don’t know if you know, but on the Avatar set we always referred to them as the big Smurfs. So there was a real affinity with bringing us over and treating us as a little brother or sister in that way, helping us out,” producer Jordan Kerner said. The visit to Avatar proved immeasurable in their effort. “They helped us a lot with understanding the color blue because there are real challenges with blue. Blue doesn’t hold very easily as a color on screen.”

When The Smurfs clips completed, SheKnows headed upstairs and sat down with the director and producer for a more intimate chat before stars Hank Azaria and Jayma Mays joined us.

Aware of potential issues from fans, director Gosnell immediately stressed why he chose to make The Smurfs a live action film.

“For me, I understood immediately it would be polarizing because everybody wants their Smurf adventures to be in Smurf Village in medieval times. But I think, for audiences coming into this fresh, the opportunity is to see a living, breathing Smurf sitting on their kitchen countertop, riding on top of a cab through New York City, running through F.A.O. Schwarz and through areas that we know,” Gosnell said.

“The wish fulfillment of that I think raises up and if you’re a kid and you see the movie with a Smurf in the kitchen then you want a Smurf in your kitchen. I think that there’s the bar that we set in terms of living, breathing, reality creatures — it’s set even higher when you take those beings and you put them in a place that everybody knows.”

Producer Kerner added, “You know, you make a creative decision going in and you have a belief in what you do. And we just had to ultimately, in the beginning with no apologies, make a decision that we wanted the Smurfs to be living, breathing, caring, funny creatures.”

Mays and Azaria seemed delighted at the opportunity to bring a pop culture sensation to life in The Smurfs. Azaria plays the villainous wizard Gargamel while Mays portrays Grace, the wife of Neil Patrick Harris who discovers Smurfs in their New York apartment which sets the Smurfs movie adventure into motion.

Mays was quick to say that acting opposite special effects was something new to the Glee star. “It’s helpful when you are looking at a bunch of stickers and you don’t know which sticker belongs to whom, even if the lines are being read,” said Mays, explaining that director Gosnell would place Smurf stickers around the set to show the actors where the Smurfs were. “It really helped put you in the right mindset for who you were talking with.” 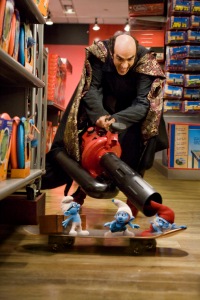 Azaria also had to interact with the stickers that would eventually become Smurfs and he found a real challenge in acting opposite a feisty feline, Gargamel’s cat Azrael.

“They are a married couple. I did at one point, and it didn’t make it into the movie, I did say at one point to the cat, ‘Why did I ever marry you?'” Azaria said and laughed.

Mays and Harris’ characters are planning to have a baby, something Harris is not so sure he’s ready to embrace. “Neil’s character, Patrick, is a little more apprehensive about becoming a father… It’s kind of nice that these Smurfs come into this world, and even though they are little blue men it is almost a trial run at this thing of being parents. I think it’s a good thing for Grace because she’s testing out her mothering abilities and seeing how that works,” Mays said.

Azaria, known for his vocal talents, most notably as a regular on The Simpsons, had more difficulty pinpointing the voice of Gargamel than he expected. “A character like this, for me the voice is the first thing. I started a little higher — there was a stock villain voice in cartoons when I was growing up,” Azaria said. “They wanted it more Shakespearean — a failed Shakespearean actor was their idea for the character. But I found that to be too low energy. You can’t be Gargamel and not be very amped up and upset about Smurfs. So it got energized, and it ended up sounding a lot like the original cartoon voice, which I could have just started with!”