Summit just released a brand new trailer for the brand new, updated version of The Three Musketeers. The film boasts a number of stars including Logan Lerman, Orlando Bloom, Luke Evans, the amazing Christoph Waltz and Milla Jovovich as Milady de Winter. Check it out below.

Right on the heels of the announcement that The Three Musketeers will hit theaters on October 21 instead of October 14, we get the second trailer for the film. There is all the swashbuckling you could wish for. There are also a lot of steam punk sci-fi elements — air ships (yes, you read that correctly), explosions and Jovovich doing slo-mo stunts worthy of a Zack Snyder film. 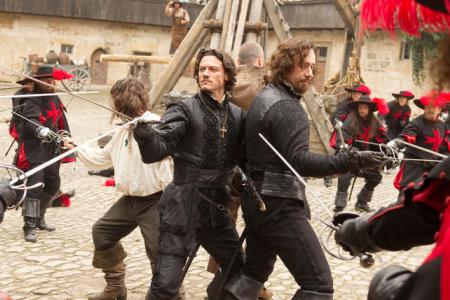 It’s been a while since I’ve read the book, but I don’t remember action like that. The action is very Pirates of the Caribbean and it’s unclear if it will win audiences over.

Still, it’s got quite the cast. There is no way I’ll ever pass up a film with Christoph Waltz. Ever. And the final moments of the trailer actually manage to infuse some humor. We’d love to hear your take. Are you ready for an updated Three Musketeers? Or do the sci-fi elements turn you off? Let us know below.

The Three Musketeers will hit theaters on October 21, 2011.