Patrick Dempsey visited The Late Show with David Letterman to promote Transformers: Dark of the Moon last night and while there, Dempsey tried to answer the controversy around how long he’ll stay at Grey’s Anatomy… but didn’t really say much. Watch the clip and see what you think! 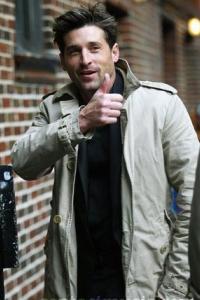 The Internet was on fire after Patrick Dempsey told Italian Vanity Fair he was done playing McDreamy on Grey’s Anatomy after this upcoming season. On Thursday, he tried to clear up the Vanity Fair confusion on The Late Show with David Letterman.

“They said, ‘Are you coming back?’ and I go, ‘No, I’m not coming back: I’m pretty much done,’ meaning my contract is up at the end of the season,” Dempsey recounted. “That sort of got out and everyone now is convinced I’m off the show, so I’m looking for employment end of next year.”

Since he said that last bit with a laugh, Letterman pushed that it sounded like Dempsey was in fact done, since he has no contract. “They could also renegotiate, if they chose to,” Dempsey clarified. “That’s what I’m waiting on from ABC.”

Ultimately, Dempsey concluded, “I wouldn’t be that worried, quite honestly. You should get some sleep. I’ll be there for a while more.”

Hmmm… A season could easily constitute “a while,” begging the question: Was Dempsey suggesting this isn’t the kind of thing Letterman should worry his pretty head about or rather, as fans would hope, that none of us should worry, because negotiations will go through and he’ll stick around?

Watch the clip, which also covers Dempsey’s racing experience, Transformers: Dark of the Moon and working with director Michael Bay, and let us know what you think Dempsey was saying about his future on Grey’s Anatomy.