Prince William and his beautiful bride Kate Middleton have hit the shores of North America and are celebrating Canada Day in style. 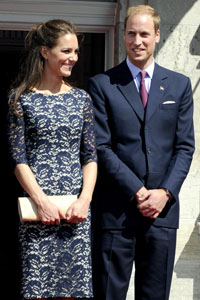 The British have invaded North America — and we love it! Prince William and his lovely bride Kate Middleton hit the shores of Canada yesterday and are helping the country celebrate Canada Day with appearances at multiple celebrations — meaning multiple outfit changes for Kate!

Kate boarded a private jet in England wearing a lovely navy dress and blazer combo, exiting on the other side of the pond in the navy and cream lace dress seen here. Later in the day she changed into a patterned wrap dress by Issa, one of her favorite British fashion houses.

Today Kate looks resplendent in the ivory ruffled Reiss dress she wore in the couple’s formal engagement photo, topped with a bright red fascinator resembling a Canadian maple leaf and a diamond maple leaf pin she borrowed from the Queen, who wore the same brooch during her first trip to Canada in 1951.

Wills and Kate are spending the day event hopping, starting first at the Canadian Citizenship Ceremony at the Canadian Museum of Civilization where a dozen new Canadians will pledge their loyalty to Queen Elizabeth. The couple will then move on to the Canada Day Noon Show at Parliament Hill in Ottawa, where Prince William will give a speech.

Later in the evening the couple will attend the Evening Show, featuring what promises to be another spectacular outfit on the Duchess.

Sometime in between, William and Kate are sure to mark a more somber occasion: The 50th birthday of his late mother, Diana, Princess of Wales.