Larry Crowne not only marks the reunion of Tom Hanks and Julia Roberts onscreen, but it is also the first time Tom Hanks has returned to the director’s chair since 1996’s That Thing You Do.

Tom Hanks directs and stars in Larry Crowne, and he also co-wrote the film with Nia Vardalos. The film is clearly a labor of love for Hanks as he also provides a different character for Julia Roberts than we’re used to her inhabiting. Her community college professor is a bit of an alcoholic with a husband (Bryan Cranston) who makes her miserable. Sure, there are quite a few classic Julia Roberts laughs, but her character is hurting and it shows in every inch of her performance. 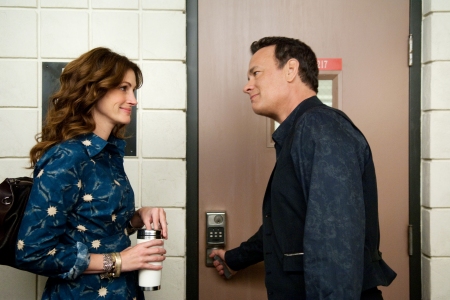 Larry Crowne follows the title character as he heads to work as a manager for the retail superstore U Mart. He’s called into the office thinking he’s about to be awarded with yet another Employee of the Month, only to discover he’s been downsized because corporate sees no advancement for him due to his lack of a college education. It is there that Hanks is able to summon his everyman onscreen persona that audiences have adored for decades.

Hanks is his usual fabulous self, as is Roberts. The film truly takes off when their two characters meet. Larry Crowne heads to the local community college to begin his education that prevented his advancement and one of his first classes, speech, is taught by Roberts. The actors do their dance as only the two Oscar winners can with the teacher-student relationship carved out at the beginning that may or may not develop into a romance as the semester progresses. 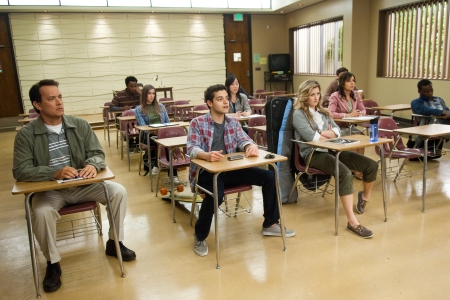 As a director, Hanks is efficient and explores every nuance of his characters. The supporting cast shines. Cedric the Entertainer and Tarija P. Henson portray Crowne’s neighbors and the comedic repartee is something to relish. Wilmer Valderrama, a somewhat underused actor of late in film as he works his Disney Channel magic with Handy Manny, comes back to the big screen with his million dollar smile as a student’s (Gugu Mbatha-Raw) boyfriend who is quite jealous of his girlfriend’s budding friendship with Crowne. And we would be remiss not to mention a scene-stealing turn by Star Trek legend George Takei as Crowne’s economics professor.

Hanks’ Larry Crowne reinvents himself as he changes his look and outlook on life while he experiences college for the first time. Through the actor’s eyes, the audience feels to its core the challenge that is affecting millions of Americans during this recession. The film resonates with a populous that can share Crowne’s situation: After years of doing great work, so many of us are finding it necessary to not only find a new job, but to completely overhaul our skills in order to survive.

But, something is missing. Larry Crowne doesn’t quite hit on all cylinders. The spark between Roberts and Hanks is more of a flare than a full-blown firework. The story also plays it safe — which is not necessarily a bad thing, but it left us yearning for more. 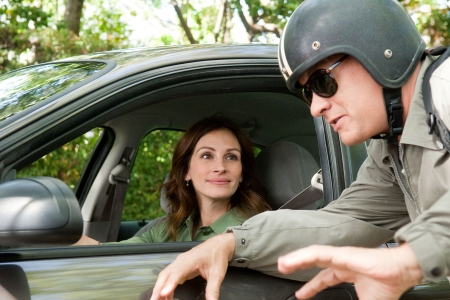 We will say that Larry Crowne is a nice distraction from the explosions of summer sequels. It is the rare movie that arrives from May through August that features adults living their lives and talking about life’s nuances. For that alone, we like you Larry.

Check out our interview with Tom Hanks and Julia Roberts!>>