Jessica Alba and her baby bump dominate the latest trailer for Spy Kids: All the Time in the World. The actress headlines the new sequel, which introduces a fresh pair of miniature spies. 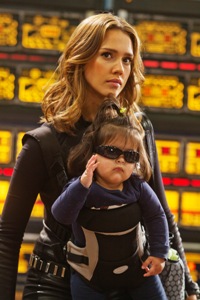 Spy Kids: All the Time in the World is the only movie opening this summer in 4D. That’s right, 4D! What’s the fourth dimension, you ask? It’s Aromascope! Not only will you get the sights, sounds, and 3D feel of the movie, you’ll get to smell it too. Isn’t that (bad pun alert) scent-astic?

In the film, Jessica Alba plays Marissa, a hardworking mother of three. She has an infant and two pre-pubescent stepchildren who accidentally uncover her secret identity as a spy. When an evil villain called Timekeeper tries to take over the world, Marissa has no choice but to let her kids in on the action.

Apparently, Marissa doesn’t let a little thing like pregnancy keep her from saving the world. In the trailer, there’s a shot of her with a huge baby belly and she’s still kicking butt. We’re pretty sure that’s not safe behavior for an expectant mother but at least she can multitask.

Spy Kids: All the Time in the World is directed by Robert Rodriguez and hits theaters on August 19.

Spy Kids: All the Time in the World trailer