Shia LaBeouf and Marilyn Manson are Hollywood’s latest odd couple. Why are the Transformers star and the shock rocker hanging out together? 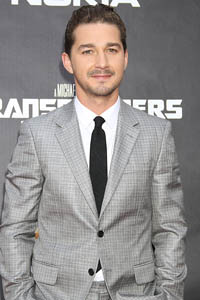 Shia LaBeouf has announced that he’ll be making a documentary starring none other than the very weird rock star Marilyn Manson. LaBeouf the director is hanging up his Transformers acting hat to pick up a camera and film the documentary focusing on the making of Marilyn Manson’s new album.

This is no ordinary coupling. “He lives in West Hollywood above a liquor store,” LaBeouf told Live with Regis and Kelly viewers of his first meeting with the notoriously strange singer. “There’s no lights in the room. And there’s sort of these big metal doors and he opens the door and he’s in a big pink kimono. It’s sort of like a lair. No lights, so you have to use your cell phone to guide you around.”

Manson is in the process of making his next album and thought LaBeouf would be the ideal guy to lens what’s sure to be a truly creepy movie of the musical artist at work in his recording studio. Unsurprisingly, Manson has some weird visions for how he wants his LaBeouf doc to look.

“We sat and watched movies for a while and talked about what kind of visuals he wanted on his album,” said LaBeouf. “Which are all really eccentric ideas.”