Glenn Beck has said goodbye to Fox News tonight after 30 controversial months on the air. 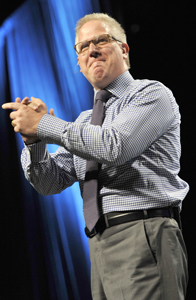 See ya later, Glenn Beck. The conservative extremist and longwinded political commentator said goodbye to Fox News after less than three years on the air.

Beck, who has referred to President Obama as a “racist” who “hates white people,” claims that his exit was planned many months ago by his own request — but that contradicts the facts that his ratings have tumbled and his often-crazed rhetoric has steadily alienated advertisers.

“Half of the headlines say he’s been canceled,” Fox News chief Roger Ailes told the Associated Press in April. “The other half say he quit. We’re pretty happy with both of them.”

At his peak, Beck pulled in nearly three million viewers during his 5 p.m. timeslot. This year he struggled to get half as many.

“I didn’t run away from something,” Beck said Thursday. “I’m running to something. I know exactly where I’m going.”

Beck spent his final Fox broadcast going over what he and his viewers have learned together.

What Beck didn’t share is what he has planned next. He’s made a lot of pretty big talk about his next step being some sort of media domination — at one point saying, “For those members of media who are celebrating… you will pray for the time I was only on the air for one hour a day” — but he has yet to announce exactly what those big huge plans might be.