Taraji P. Henson and Cedric the Entertainer star as a married couple who live next door to Tom Hanks in Larry Crowne.

The onscreen pair talked about how they would personally deal with the film’s issues. Cedric the Entertainer and Taraji P. Henson also dish why Larry Crowne is the true superhero on this weekend that also sees the Transformers sequel landing in theaters as well as what they would do if they had to return to school as Larry Crowne (Tom Hanks) has to do in the film. 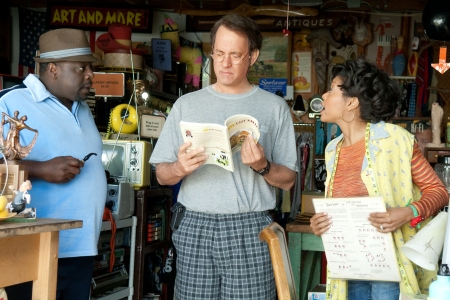 SheKnows: In Larry Crowne, your characters are independently wealthy after having won the lottery. If you were to randomly win what they won — a half million dollars — how would you spend the money?

Cedric the Entertainer: I don’t know. Half a million dollars, these days? I’d have to buy some more lottery tickets.

Taraji P. Henson: [Laughs] You wouldn’t be able to quit your job. You’d have to keep working, that’s for sure.

Cedric the Entertainer: I’d be like, “I’m gonna need some more lottery tickets. This is not enough.” But, no, you know, I would enjoy some little spoils of life, something quick…

Taraji P. Henson: I’d probably blow it all on shoes.

Cedric the Entertainer: A sports car. Shoes for you?

Cedric the Entertainer: Yeah, I’m thinking Ferrari. That’d be it, though.

Taraji P. Henson: But could you afford the maintenance?

Cedric the Entertainer: No. It would be a two-month thing. Just floss, ride hard, and let everybody see me and then…

Cedric the Entertainer: Then the next week, “Where’s your Ferrari, Ced?” “Oh, it’s in the shop.”

SheKnows: Larry Crowne and your characters, Lamar and B’Ella, live in a very close-knit neighborhood. Do you now live or have you ever lived in a neighborhood like that? 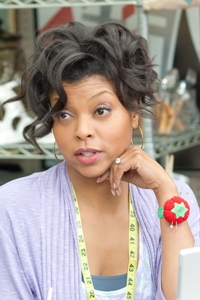 Taraji P. Henson: I don’t know my neighbors on purpose because I live in the neighborhood where the star trucks come, the star vans, and so they just know me as “TJ with the hat and shades.” Because I really don’t want the word to get out, because I would be horrified to wake up to: “And this is where Taraji P. Henson lives! You know, she played Brad Pitt’s momma!” I don’t want to wake up to that. I’m very cordial and nice to my neighbors, but they just don’t know what I do.

Cedric the Entertainer: Probably not so much now, but, coming from St. Louis, I definitely grew up in a neighborhood that really resembled that of the movie, where you knew your neighbors, you had the friends, you had concern about everybody that lives immediately around you. So, it was something I could pull from right away. But now I’m behind three gates, so I don’t know anybody in my neighborhood.

Cedric the Entertainer: You can’t even get close to me.

Taraji and Cedric go back to school

Taraji P. Henson: I would probably do hair and makeup and fashion, something like that.

Cedric the Entertainer: Landscape design. I love trees and yards and the different grass. I’ve been playing golf, so I’ve been learning about the different grass and all that kind of stuff. But I really liked this cast. I thought it was a very good look into the culture of the day, especially with people losing their jobs and being later on in life and then having to reinvent themselves. It was great, the little cul-de-sac community that we had there — and to see a guy who seemed like he was doing all the right things in life, but then things go wrong for him and then to have to reinvent himself, even the way he dressed and all that became a new attitude. It was inspiring for that reason. I call this the real superhero movie of the summer.

Taraji P. Henson: [Laughs] Who cares about Transformers? We have Larry Crowne. Do they wear a crown? I think not.

Cedric the Entertainer: This is the Crowne. This is a guy who really has to take care, get his stuff together and get back on his feet. It was real heroic and I enjoyed it for that reason, when I saw the film. I’m glad to be a part of it.