Tobey Maguire has fired back after he was accused of participating in an illegal poker ring, along with other celebrities including Ben Affleck, Matt Damon and Leonardo DiCaprio. 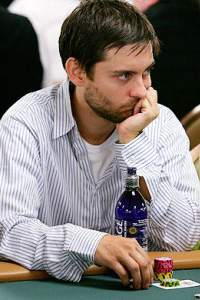 Spider-Man has found himself in a very tangled web! Tobey Maguire’s attorneys filed papers today disputing a lawsuit that says he owes $300,000 for his winnings in an illegal poker game.

Maguire admits he did play poker, but said he didn’t know it was illegal. The documents say that the actor “unconditionally denies having engaged in any conduct whatsoever in violation of law and further categorically denies having knowingly or intentionally participated in any fraudulent scheme.”

Bradley Ruderman, who masterminded the games, is serving 10 years in prison for a Ponzi scheme he ran to pay off the debts he had by playing Maguire, as well as other A-listers including Ben Affleck, Matt Damon and Leonardo DiCaprio.

It is not Ruderman who is suing Maguire, but rather the investors he scammed in his Ponzi scheme that are looking for ways to get their money back.

In the court documents, he also says he was “invited to participate in the poker games” but says there was not a “regular roster of players consisting of wealthy celebrities, entrepreneurs, attorneys and businessmen” and they were not “controlled games” with a licensed host.