Linda Hogan’s way-younger fiance has a secret. His father was popped for drug possession! 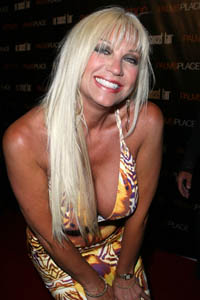 Linda Hogan‘s father-in-law-to-be has run afoul of the law. Richard Hill, the father of Hogan’s 22-year-old fiance, was arrested for possession of a controlled substance. Does this mean he won’t be able to be at the wedding?

At 52, Hogan’s future father-in-law is one year older than Linda is. Her fiance, Charlie Hill, is 29 years younger than she is and was a friend of her kids.

When the elder Hill was pulled over earlier this year by Clearwater, Florida police for not wearing his seatbelt, the officer spotted a bottle of prescription pills in the vehicle. Richard claimed they were his, but the bottle had his 89-year-old mother’s name on it. Then Richard claimed his mother had given him the 35 100-milligram Darvocet pills for back pain.

Needless to say, Richard was arrested and released after posting a $2,000 bond. Later, he showed up in court but could not afford an attorney due to “insolvency.”

Meanwhile, Linda is peddling her memoir of life with her ex-husband, professional wrestler Hulk Hogan: Wrestling the Hulk: My Life Against the Ropes. “I was always afraid he would kill me in one of his rages,” she writes in the book. “That was something that scared me. I did not want to be a statistic like Nicole Simpson.”

Hulk responded by calling the accusation a “cold, blatant lie.”