Is Stephen Colbert setting up a presidential bid? Not exactly — but he just took a huge step towards helping Americans decide who the next president will be. 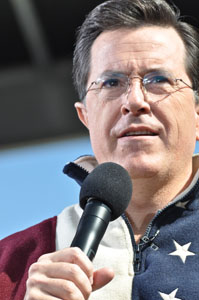 Stephen Colbert is a political powerhouse waiting to happen. The host of The Colbert Report, a satirical news show mocking conservative right wing politics, has just been approved to start his own Super-PAC.

A Super-PAC is a political action committee that can legally accept unlimited contributions — and Colbert intends to use his powerful media platform to help shape the landscape of the 2012 elections.

“Sixty days ago today on this very spot a young man petitioned the FEC for permission to form a Super-PAC to raise unlimited monies and used the monies to determine the winner of the 2012 elections,” Colbert said. “It was me.”

“Thank you for standing with me for freedom,” he said. “It has been said freedom isn’t free. Today we have placed a sizeable down payment, today we have put liberty on layaway.”

The decision means that Viacom, who owns Comedy Central, can pay for Colbert political ads without reporting it — as long as the ads are only shown on Comedy Central. Contributions must be reported if the ads are shown on other networks.

“There will be others who say, ‘Stephen Colbert, what will you do with the unrestricted Super-PAC money?'” Colbert said after the FEC hearing. “To which I say, I don’t know. Give it to me and let’s find out.”