Victoria Beckham has politely declined the opportunity to be the next big star to bare their pregnancy bump for the world to see. See why Posh prefers her clothes stay on! 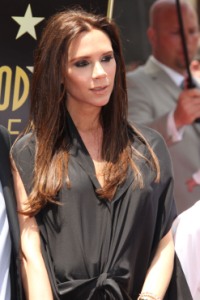 Victoria Beckham’s baby bump is a personal matter. The woman once known to the world as Posh Spice has declined to put her pregnant body on display in a nude portrait as so many other stars have done.

“Nope. Sadly not,” Victoria Beckham replied when asked if she’d be posing nude. “I’m not really one of these people that likes to go out and pose and flaunt being pregnant.”

The 37-year-old then quickly made sure not to offend the numerous stars who have chosen to do so, adding, “Not like there’s anything wrong in that.”

Victoria Beckham went on to explain to WWD, “I’m so proud to be pregnant and I feel so blessed and so happy, I really do. But I’m just not that kind of person. So, no, I won’t be taking my clothes off. I don’t think anyone needs to see that, other than my husband. Absolutely not.”

Victoria Beckham, pregnant with a baby girl, hasn’t wasted any time stocking up on a wardrobe for her first daughter. The baby-to-be reportedly has an “impressive” wardrobe awaiting her arrival. “But not in an obnoxious way at all,” Victoria protested. “I love the French clothes for little girls. I like little girls to look like little girls.”

The mother of three boys with husband David Beckham insists that though juggling career and mom duties is a challenge she wouldn’t change a thing. “As any working mum out there knows, it really is like juggling glass balls when you’ve got the kids and a husband to look after, and you’re passionate about your career. It’s a lot. But I wouldn’t have it any other way. I’m blessed.”

Blessed indeed! Though we would have liked to have seen some Victoria Beckham pregnancy photos!