Lindsay Lohan celebrated her first night of freedom by going out with her friends — did she party a little too hard? 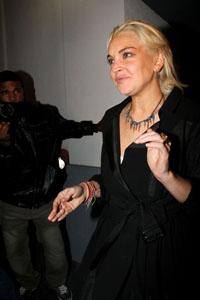 After 35 days under house arrest Lindsay Lohan is free — and the star celebrated by hitting up the Lexington Social House in LA with some pals.

On her way out, the star was mobbed by photographers and by the way she was stumbling around you’d think she got wasted inside. So was she actually drunk?

Lohan and her pals, Emile Hirsch and Lyndsy Fonseca, were mobbed by paparazzi as they left the club, and with flashbulbs popping in every direction Lindsay had to block her face to avoid being blinded. Doing so left her with zero visibility and she nearly fell over when she tripped on the curb.

Seeing the truth with his own eyes didn’t stop one photographer from stirring up trouble by shouting, “She’s drunk!”

Even if she was — which by all accounts other than that guy’s she wasn’t — there’s legally nothing wrong with that. She is not prohibited from drinking while on probation, as the recent ruling over her positive alcohol test proved. Whether someone who has been to rehab a half dozen times should be drinking is another story.